Enter for a chance to Win a Free Vacation!

Known as the "Happy Isles," the Solomons are one of the best-kept secrets in the Pacific. These are islands of great natural beauty from jungle-clad peaks and active volcanoes to dashing waterfalls, misty rainforests, turquoise lagoons, and brilliant coral reefs. The islands' variety of cultures and customs is also striking. In Honiara, backstreet quonset huts and an occasional, rusty wreckage provide grim reminders of World War II; over 25,000 Japanese and American soldiers were killed or wounded on Guadalcanal. Honiara has been the capital of the Solomon Islands since Tulagi was devastated during World War II.

Tanna Island, Vanuatu
12/23/2020
12/23/2020
Located in the South Pacific, Tanna Island is one of the most populous islands of Vanuatu.  Most of the Melanese inhabitants of Tanna strictly adhere to very traditional customs and lifestyles including rejection of public schooling and other modern amenities.  On the southeast coast of the island there is an active volcano, Mount Yasur, which is a popular destination for visitors.  As one of Vanuatu’s most productive islands, Tanna is best known for its Kava, coffee, coconut, and many other fruits and vegetables.
Baie de Prony
12/24/2020
12/24/2020

Auckland is regularly voted one of the best lifestyle cities in the world, with the cosmopolitan city centre complemented by great escapes within half an hour of downtown. Indulge in Auckland's shopping, nightlife and unrivalled cuisine and experience some of the many attractions and adventure activities on offer. There is never a shortage of things to do in the City of Sails. Sights to see include Auckland Art Gallery, Auckland Zoo, and Museum of Transport and Technology. 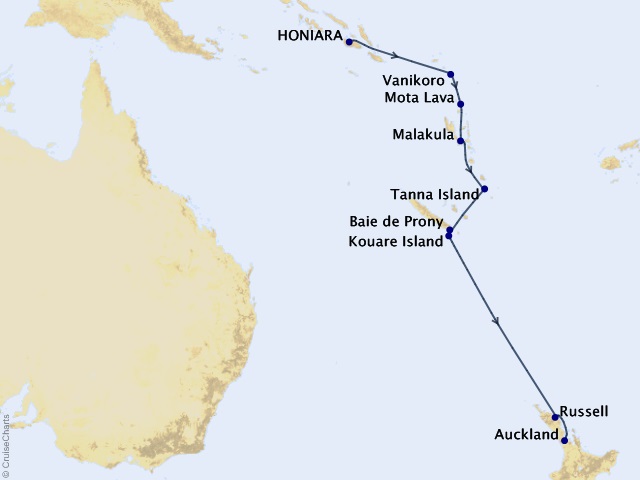 Itinerary subject to change without notice. Please confirm itinerary at time of booking.

Departure Date:
12/18/2020
Number of Nights
11
Cruise Inclusions:
Remarks:
Fares listed are per person, based on double occupancy, unless otherwise noted.

All fares are quoted in US Dollars.

All prices per person and in USD unless otherwise stated.
Offer ID:
1359845

Reference this number when contacting our agency so we may better serve you. Also keeping this number handy will allow you to locate this document again quickly.

Information and pricing is subject to change without notice. While we do our very best to ensure that information and pricing appearing in this website is complete and accurate, we cannot be responsible for incomplete and inaccurate representations, which may or may not be under our control. In the event of a pricing error, misrepresentation or omission, we reserve the right to adjust the pricing or make any other corrections.

Travel Design USA, Inc. We recommend optional travel insurance that protects you in the event of having to cancel your trip avoiding travel vendor cancellation policies and more! — Click here!